For the second year in a row, Regina and Burke Gower combined their fitness and cycling interests through organizing a ride to benefit the Northwest Arkansas Women’s Shelter (NWAWS): Bikes, Brews and No Abuse. This year, the ride was around Lake Atalanta in Rogers, and involved 30 riders. Also partnering that day were three breweries and one cidery, all of which committed a percentage of their sales to benefit NWAWS: Bike Rack Brewing Co, Core, New Province, and Black Apple Crossing.

Domestic abuse is a personal issue for Regina.

“After my sister Natalie was killed by her husband, I knew I wanted to do whatever I could to help other victims of domestic abuse. Domestic abuse and violence isn’t just about being physically hit. It includes emotional abuse and financial abuse, too. My sister was never hit, but we saw abuse in other forms.

I first became involved with a domestic violence shelter in Muskogee where I was living at the time my sister died. When I moved to NWA, I reached out to the Northwest Arkansas Women’s Shelter to see how I could help. What is most important to me is to make sure other families don’t go through the pain and grief my family went through. If I can help one victim of abuse or that family member by giving them the resources they need, or the courage, then all my work to raise awareness is worth it.” 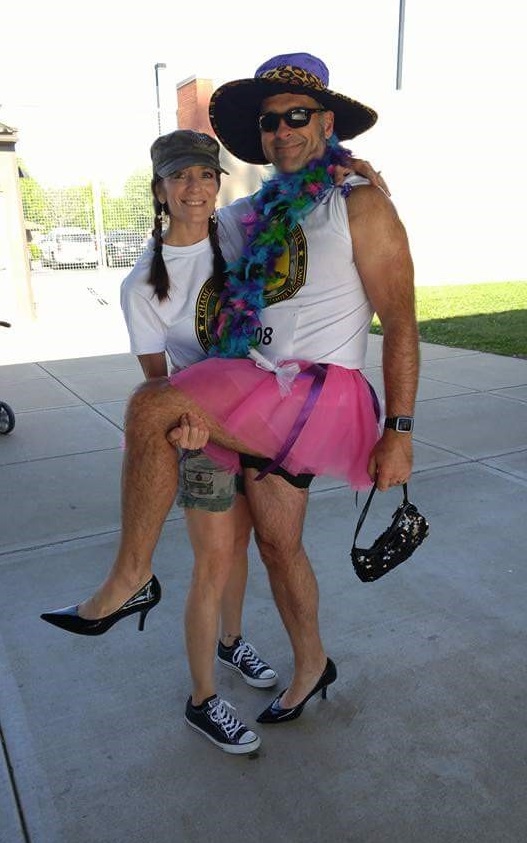 Regina and Burke at Champions In Heels 2016

Regina and Burke have been volunteers with NWAWS since 2011. Regina also serves on planning committees for Champions on Wheels, a family-focused outdoor bicycling event, and Silent Witness, an awareness event honoring the memories of Arkansas homicide victims who lost their lives due to domestic violence.

Bikes, Brews, and No Abuse raised almost $1300. This equates to providing 1 victim of violence 2 weeks of safety from her abuser.

Thank you, Regina and Burke, for being the voice for those who have lost theirs due to domestic abuse!

If you want to combine your talents and interests with a fundraiser for NWAWS, you can contact Merritt Royal Weeks, mroyal@nwaws.og, or read more here.

Want to be a champion like Regina and Burke? Apply to volunteer today!